In Gobliiins the player controls a team of three different goblins, each with a unique skill. The first goblin, Asgard (BoBo in the US release), is a warrior who is more brawn than brain, and whose skill is punching, causing various things to break or fall over. He is also the only one who can climb other objects than stairs and ladders. The second, Ignatius (US: Hooter), is a magician who can 'zap' things with magic with a wide variety of usually unexpected effects, which include objects moving, growing, or becoming alive. The third, Oups (US: Dwayne), is a technician and is the only one of the three that can pick up and use items.

The game is linear and consists of 22 levels, each of which occupies a single screen. The puzzles on each level must be successfully solved in order to progress to the next.

Several actions may harm the goblin involved, including leaving them in an unsafe place, using incorrect items, or interacting with items with the wrong characters, thus reducing their shared life meter. When the meter runs out, the game ends in defeat (though all levels can be completed without loss of life). 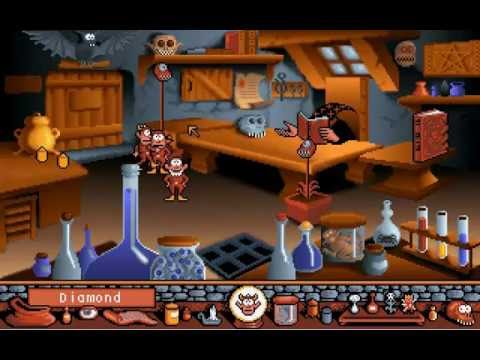 In Gobliiins the player controls a team of three different goblins, each with a unique skill. The first goblin, Asgard (BoBo in the US release), is a ...

Assimilate Gameplay Demo 1-3-11
This is a gameplay demo of the NES homebrew game I'm working on titled "Assimilate." This specific footage is captured from the demo that ...